Empowerment of Women Victims of Armed Conflict in the Region of Magdalena Medio, Colombia (2011)

Empowerment of women victims of armed conflict around the Victims Law, the Land Restitution Law and processes of historical memory recovery in the region of Magdalena Medio, Colombia (2011)

Project in partnership with the Colectiu Maloka Colòmbia, the Marcha Mundial de Mujeres and the Plataforma unitaria contra les violències de gènere. The project aims to empower women victims of the armed conflict in four municipalities in the Magdalena Medio region to achieve a greater capacity for social and political advocacy locally and regionally around the Victims Law and the Land Restitution Law, as well as greater leadership capacity in the development of processes of historical memory recovery. This is about ensuring their visibility, recognition and dignity as victims at a time that is especially strategic insofar as the current Colombian government is generating a legislative framework that places the rights of victims at the centre of public policy. The project will benefit 200 women from the 15 organisations that make up the Magdalena Medio network of the Women’s Social Movement against War and Peace, created by the Organización Femenina Popular (“Popular Women’s Organisation”). 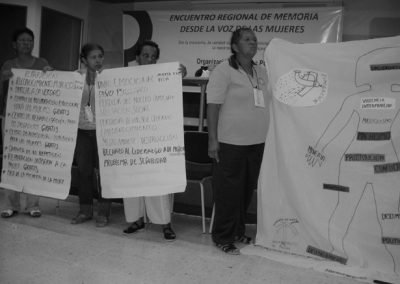